Security Doors come in many shapes and styles

Security doors are built not only with more secure locks that cannot be picked, but they are also installed in such a way that they cannot be torn off or detached from the frame or the door jamb. Basically, these doors are really built for preventing any forced entry and can really keep a home or establishment safe.

How do Security Doors look?

Although some people tend to think of these doors as being so functional that they might look like various versions of a prison or vault door, there are actually different types of security doors to choose from. People can choose a look that would suit the look of their home or establishment in terms of design and space.

These doors may come in the form of hinged doors, sliding doors, or double doors. Hinged doors are the most common 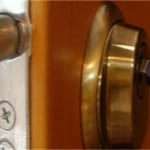 types of doors used, and they look a lot like regular doors. This is a common popular choice because it often matches the look of home and is the most classic design of a door. When installing these kinds of doors, a subframe is often used so that the door is not attached to the door jamb directly. This is so because there might be problems with regard to lock jams when the seasons change and the door’s wooden material expands.

Sliding doors are also an option and they look just as great as regular sliding doors which are often used for a neater look and to allow light to come in through the glass. The secure version of sliding doors is the one that comes with a screen layer or another cover for glass panes. It is a common way for intruders to get into a home or establishment by breaking the glass. With secure sliding doors, breaking glass will not be an issue as there is an additional barrier.

Double doors can be either hinged or sliding doors, and they are secure in such a way that one door locks into the other, which is fixed. Both doors can be opened though when needed. So, people can choose from hinged, sliding, and double doors, find the one that would suit the look and size of their home or establishment, and they can easily have security doors installed.

Some people may still want to add another layer of protection on top of a security door. If they wish, they can have security screens and barrier screen doors installed too. Security screens are very close to security doors, except that their are mainly screens that will allow air and light to come in, so that windows are not left open. Barrier screen doors are ordinary doors with a single lock, and are often installed outside of the main door, as another layer of a door with a lock.

Our friendly knowledgeable staff are standing by to answer any question you may have.